John Glenn: A Life of Service 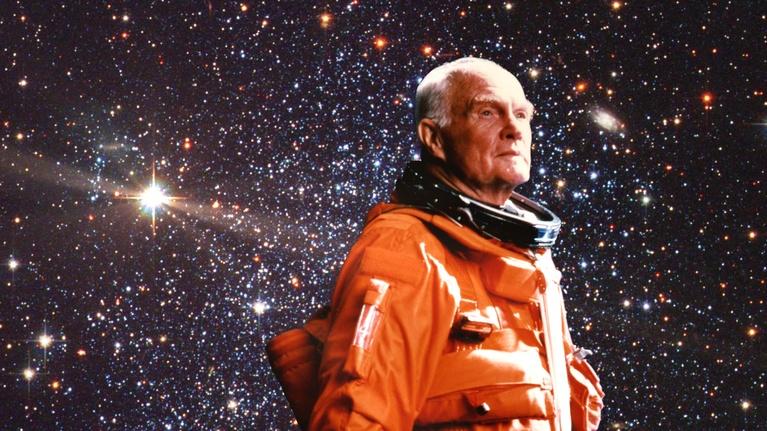 Thanks for participating in the chat to celebrate the premiere of John Glenn: A Life of Service’

The documentary will be re-aired on Sunday, July 28 at 8 p.m. on WOSU TV. The DVD version can be purchased at wosu.org/shop.

Join WOSU Public Media's Ben Bays, producer of the John Glenn: A Life of Service documentary as well as Jeffrey W. Thomas, archivist for the John Glenn Archives at The Ohio State University for a look inside the documentary.

We'll share key scenes from the documentary as well as some exclusive deleted scenes.

John Glenn: A Life of Service chronicles an American hero, born in Ohio, who dedicated himself to a life of duty and public service. From war pilot, to the first American to orbit the Earth to his days in the Senate, it shows the pivotal moments of a man who put country before self.

John Glenn: Growing Up During The Great Depression

Growing up during the Great Depression in New Concord, Ohio, John Glenn witnessed first-hand how President Franklin D. Roosevelt's government-sponsored initiatives could help the country. Glenn's father served as a foreman on a sewer project funded by the Work Projects Administration (WPA).

Throughout his tour of duty in the Korean War, John Glenn flew over the front lines and the tail of his fighter jet was hit several times by enemy gunfire.

Before John Glenn's historic orbiting of the Earth aboard Friendship 7, the mission was delayed 11 times due to mechanical issues and system malfunctions. With his life at risk, the flight was delayed six weeks. Glenn finally went into space on February 20, 1962.

John Glenn served 23 years as a U.S. Senator from Ohio. However after two failed attempts, John Glenn was criticized by Democratic challenger Howard Metzenbaum in 1974 that he had never worked for a living. In a debate at the Cleveland City Club Glenn gave what is now known as the "Gold Star Mothers" speech where he argued service by him and others who held jobs of duty made sacrifices to their co

The possible matchup of John Glenn against President Ronald Reagan in the 1984 presidential election caused Reagan's Chief of Staff James Baker to flinch during a conversation with PBS NewsHour Political Analyst Mark Shields.

John Glenn: Down To Earth In The U.S. Senate

Former colleagues in the United States Senate Patrick Leahy and Carl Levin discuss John Glenn's humility and sense of humor he displayed while on Capitol Hill.

Following his first historic space mission, John Glenn managed to stay humble despite all the praise that was directed toward him. Credit for the humility went to his wife, Annie. NBC News space correspondent Jay Barbree recounts one occasion where Glenn started to buy the hype. Barbree shares how in her quiet manner, Annie spoke up to help keep her husband's feet on the ground.

On Oct. 29, 1998, the Discovery blasted off from the Kennedy Space Center with John Glenn the oldest person to go into space. The nation's attention was captivated by the mission which included the 77-year-old space pioneer.