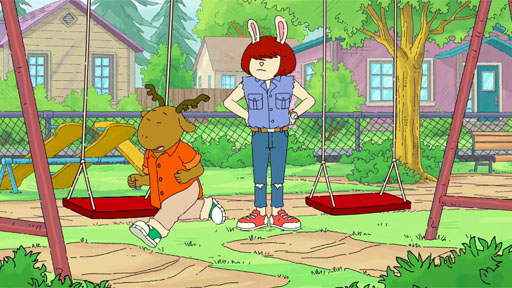 ARTHUR, television’s longest-running children’s animated series, is kicking off its spring season with a week of all-new episodes, including two devoted to the issue of bullying.

Please join us for an exclusive screening of those episodes with Carol Greenwald, Senior Executive Producer for WGBH Children's Programming, and Ed Bowers, Ph.D. Research Assistant Professor for the Institute for Applied Research in Youth Development at Tufts University.

We will be screening "The Last Tough Customer" and "So Funny I Forgot to Laugh." Episode descriptions are below:

The Tough Customers realize it’s time to quit bullying and set out to find a new hobby – but can Molly ever truly change her ways?

“So Funny I Forgot to Laugh”

Arthur thinks his jokes about Sue Ellen’s new sweater are all in good fun but Sue Ellen’s feelings are hurt. Has Arthur become…a bully?

ARTHUR, based on the best-selling books by Marc Brown, is television’s longest-running children’s animated series. Over the past 15 seasons, ARTHUR has remained one of the highest-rated weekday children's series on PBS among children 4-8. ARTHUR has won numerous awards, including the George Foster Peabody Award, a BAFTA, and six Daytime Emmys®—four for Outstanding Children's Animated Program. ARTHUR is produced by WGBH Boston and 9 Story Entertainment. Executive producers are Carol Greenwald (WGBH), Vince Commisso (9 Story), and Marc Brown (Marc Brown Studios). Directed by Greg Bailey. Funding for ARTHUR is provided by public television viewers. Corporate funding is provided by Chuck E. Cheese's®.

WGBH Boston is America’s preeminent public broadcaster and the leading producer of primetime and children’s programs for PBS, including Masterpiece, Antiques Roadshow, Frontline, Nova, American Experience, Arthur, Curious George, and Martha Speaks. WGBH also is a major source of programs for public radio, a leader in educational multimedia, and a pioneer in technologies and services that make media accessible to the 36 million Americans who are deaf, hard of hearing, blind, or visually impaired. WGBH has been recognized with hundreds of honors: Emmys, Peabodys, duPont-Columbia Awards...even two Oscars. For more information, visit www.wgbh.org.

The Tough Customers decide to quit bullying and find new hobbies, but Molly is having trouble making the leap.

So Funny I Forgot to Laugh

Arthur thinks his jokes about Sue Ellen's new sweater are all in good fun, but Sue Ellen's feelings are hurt. Has Arthur become... a bully?